Does genetic testing for CPT2: http://www.genedx.com/test-catalog/disorders/carnitine-palmitoyltransferase-ii-cpt2-deficiency/


List of Resources I found regarding triggers (also contain a lot of good information about CPT2):

Posted by Gary Shuster at 4:09 PM No comments:

Symptomatic but no CPK elevation....

Yesterday morning I awoke with muscle pain.  It was in my lower legs and lower back, and it felt dead-on like the beginning of a CPT2 episode.  I had MCT oil, corn starch, Gatorade, carbs -- you know, the usual stuff I do when I feel a CPT2 episode coming on.  My muscles remained sore -- and I continued to feel like I was having an episode -- when I had my blood drawn at 1:38 p.m.  I tested at the high end of normal, 138.

This is a very interesting piece of information.  It means that there is a significant time window in between feeling markedly symptomatic and incurring enough rhabdomyolysis to elevate my CPK.  I doubt that intervention will stop the rhabdomyolysis every time.  In fact, I'm pretty sure it won't.  But knowing that an episode can start and end without triggering seriously elevated CPK feels like an important data point.

While I was hospitalized, I couldn't find a source for how fast CPK numbers come down.  I'm sure everybody's numbers drop at different rates, but here is my recent CPK history, in case somebody finds it helpful.

The literature is confusing as to what triggers CPT2 episodes.  This article is an attempt to list everything identified as a possible trigger, and to identify the sources that identify it.  Obviously, triggers identified by many different sources are the most likely to be strong triggers.


CPT2 Triggers based on anecdotal evidence:

Treatment Protocol: “Glucose remains the mainstay therapy in the management of CPT II deficiency. Intravenous glucose infusions have been shown to be beneficial in improving exercise tolerance, whereas oral glucose has not” (Nature)

Interesting:  “Exercise tolerance is markedly improved by a glucose infusion in patients with CPT II deficiency, but because of lower glucose availability and higher insulin levels that inhibit muscle glycogenolysis, the patients cannot achieve this effect themselves by oral glucose ingestion.” http://www.ncbi.nlm.nih.gov/pubmed/12370460?dopt=Abstract&holding=npg

Posted by Gary Shuster at 5:24 PM No comments:

When I was recently seen in the emergency room, I realized that it would be very helpful to have a quick list to provide the triage nurse and others.  This list is in no way medical advice, and does not substitute for a discussion with your own physician.

This is a draft/guess/starting point for what such a letter might look like.  Please leave any feedback in the comments, or just email me.  I'd love to come up with a template that can be used generically for those with CPT2.  I'll be adding to and correcting this post over time.

Your patient, Gary Shuster, has been diagnosed with Carnitine palmitoyltransferase II Deficiency, or "CPT2 Deficiency".

The interpretation given those results was as follows:  Only one mutation was found, but the acylcarnitine ratio is in the range expected for CPT2 deficiency-affected individuals.    Accordingly, the patient has a second mutation in a non-coding region of the gene or in a different gene in the fatty acid oxidation pathway that has impact on CPT2 gene function.

The patient will likely present with as many as five primary symptoms:

Please note that any one of these symptoms indicates that the patient is highly likely to be experiencing a CPT2 episode.

The following must happen immediately in order to stabilize the patient and prevent further renal damage:

CPT2-induced muscle damage and rhabdomyolysis can be triggered within a hospital setting.  This patient was hospitalized on August 2014 for elevated CPK secondary to CPT2 deficiency.  While hospitalized in a two-patient room, the patient experienced a relapse (as measured by a significant increase in CPK levels several days after CPK levels began to drop) as a result of lack of sleep and stress.  The patient must be placed in a single room to maximize sleep and minimize stress.  Placement of the patient in a multiple-patient environment must be avoided as it creates a substantial risk of relapse.  As viral infections in the herpes family are strongly associated with CPT2 episodes, the patient must be maintained on Aclyclovir 400 mg bid.

CPT2 episodes are triggered by the following:

The literature is in conflict about certain other potential triggers, so the patient should be monitored for signs of relapse if the following are present:

Posted by Gary Shuster at 12:53 PM No comments:

UPDATE 9/16/2014:  I have been told that cooking corn starch (or even mixing it with orange juice) makes it much more quickly metabolized, thereby reducing its efficacy in preventing the onset of CPT2 symptoms.  I'm not a food scientist (a food fan, yes, food scientist, no) so I cannot say whether this is accurate or not, but I'm proceeding as if it is accurate.  So MCT oil cookies, yes, but the corn starch is back to being mixed with water for a "fun" drink.

I'm taking this whole "preventing muscle breakdown" very seriously.  I don't want to be back in the hospital due to my not paying attention.

There is plenty of anecdotal evidence that MCT oil and corn starch can help prevent CPT2 attacks.  I'm not sure what the deal is with corn starch, but with MCT oil my understanding is that it is one of the few fats that CPT2 patients can metabolize normally.  My new approach is to substitute MCT oil for other fats when possible.

I took the normal "toll house cookies" recipe and modified it as follows:

The results were great.  I vacuum sealed a bunch of "4 packs" of the cookies and put them in the freezer.  They're easy to grab and much more manageable than trying to eat a spoonful of MCT oil and a bunch of corn starch.

I'm sure I'll tire of MCT cookies soon, so I'm going to keep trying to develop new recipes.  In the meantime, I have the cookies. 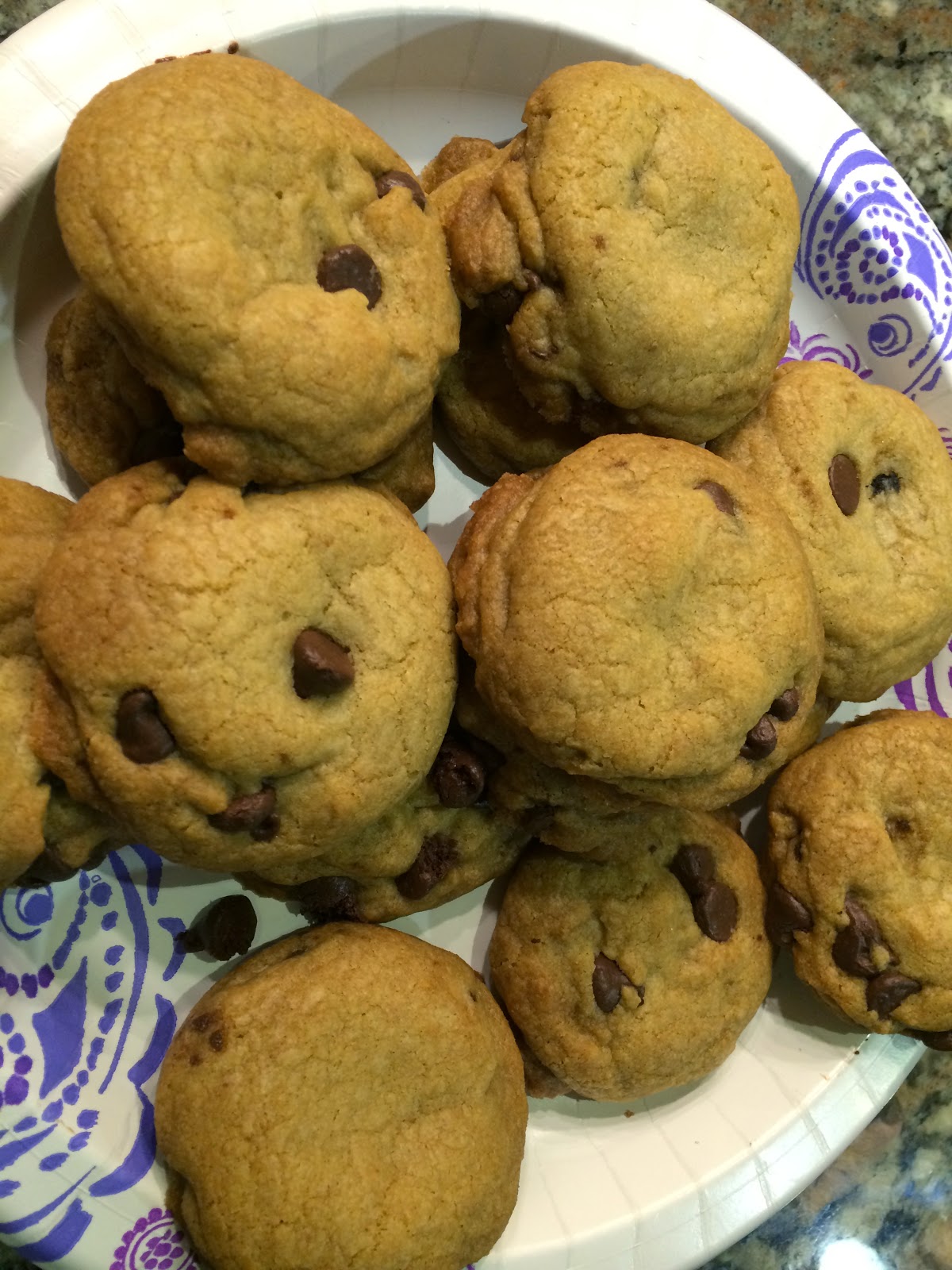 The end result -- cookies that look and taste great. 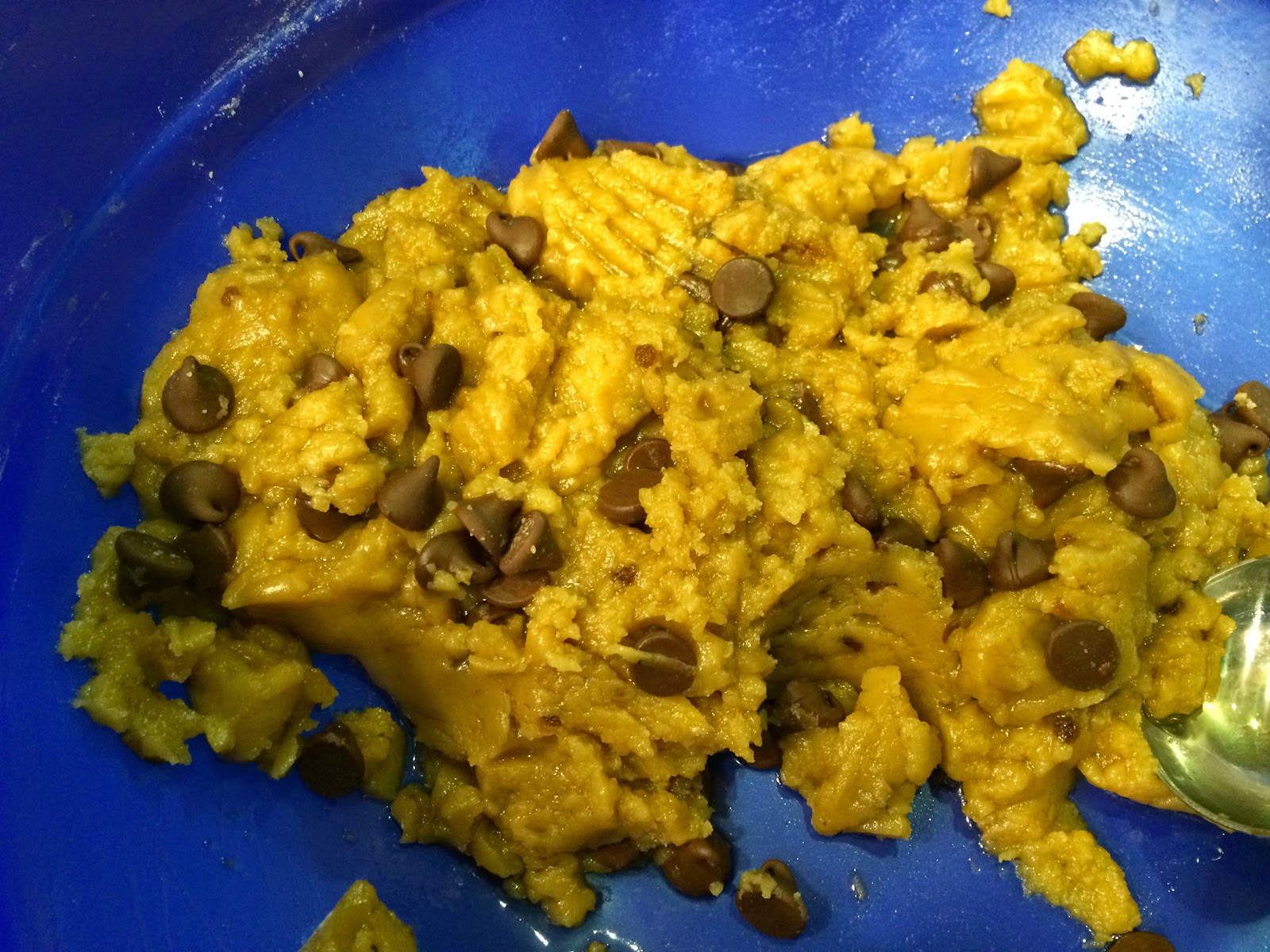 The uncooked dough.  It sure looked like it was going to be a disaster.

Posted by Gary Shuster at 6:21 PM No comments: