My ER visit triggered CPT2 and landed me in the hospital

I have a card with my ER protocol on it.  I've reproduced it below: 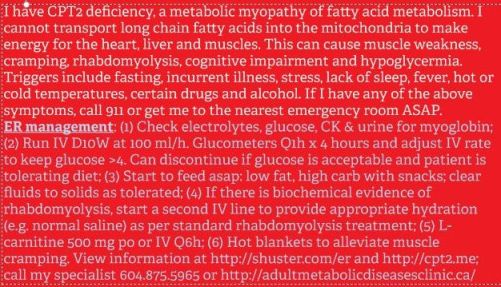 I was sick from Friday until Monday.  I had a bad sore throat and a fever.  I decided to go to the walk-in clinic on Monday and was given antibiotics and a strep swab.  While waiting for the antibiotics, I took care of an outstanding labwork order that included a CK measurement.  My CK was 109, well below the 165 that is the upper limit of normal.  In other words, careful diet management over the weekend avoided my illness turning into a CPT2 episode.  If only it had ended there.

I started having a cough and when my pulse oximeter read only 91, I decided to go to the ER.

When I arrived, the first thing I did was hand them my card.  They said basically "no thanks, hand it to the triage nurse".  A while later, I was called to see the triage nurse.  I again said I have CPT2 and handed her my ER protocol card.  She held it for perhaps 30 seconds glancing between me and the card.  In retrospect, she was either a remarkable speed reader or just pretended to read the card (or maybe she skimmed it).  It was a very busy day in the ER and I suspect she was under a lot of pressure to move the line along.

After waiting for a long time (total time sitting in the ER waiting room was around 6 hours, so the blood draw was likely after about 90 minutes) I was given a blood test, but they didn't order CK. At this point I was worried that the stress of being in a standing-room-only waiting room could potentially trigger a CPT2 episode.  When they first said they would order a blood test, I asked them to please add CK, and they said they would, but when my blood was drawn, the order didn't include CK.  I asked the person taking the blood to please fix this and add a CK reading.  I later learned that CK wasn't run initially, and it wasn't until much later, when I was symptomatic, that they read the CK.  It turns out that it was around 1,000 at that time.

It is worth remembering that had they followed my ER protocol, I would have already been on a D10 drip, so I'd be home now instead of writing this from a hospital bed.  If they had fed me as the protocol required, that also would have avoided this whole episode.  But they didn't, and I was sent back to the waiting room to, well, wait.  And wait.  And wait.

There was a vending machine there, but all of the solid food snacks were too high in fat to be helpful.  However, there was also a soda machine that had orange juice, so I kept up my carb intake that way.  Sadly, orange juice failed me.

I started to feel leg pain, but what is scarier is that my earlier cough was masking muscle breakdown pain in my chest, upper back, and most frightening, my diaphragm (you know, the muscle that lets you breathe).  I figured the pain was from the coughs.  It wasn't.  Soon I was in pretty severe pain.  Luckily, my long ER wait was finally up and I was called back.  At that point, all of the breathing issues that brought me to the ER in the first place had resolved on their own.  However, I now had a much bigger problem.  They re-ran my CK and it was up to 3,000. I was finally started on D10 and given juice.  A couple of hours later it was 6,000.

So what went wrong?  First off, they didn't follow my ER protocol.  That sucked, but I should have been way more pushy about it.  While I lived in the US I would have been (I know this because I once asked a US hospital's ER staff to let their risk management department know they were ignoring my ER protocol).  But this is Canada, and that kind of behavior just isn't done (though it will be done next time).  So my second error was not becoming hyper-insistent and pulling out my "I'm a graduate of Harvard Law and I know you should be following this -- who is your supervisor" persona.

My third error was not adding up triggers.  I know triggers.  I maintain a well researched and sourced list of triggers.  Infection is a trigger, and I definitely had that.  Fever is a trigger, and I'd had that all weekend and probably part of Monday.  Anxiety is a trigger -- and waiting in that ER lobby for endless hours certainly stressed me out.  I've never had a CPT2 episode with less than 3 triggers (with one exception -- the dual triggers of not eating enough food and exercising too hard).  However, I've had plenty of episodes with all kinds of mixtures of three or more triggers.

Again, the ER protocol was designed to avoid just this scenario.  CPT2 episodes can cause what my wife has aptly named "brain fog".  It is likely a result of hypoglycemia that is part and parcel of the CPT2 experience.  In fact, this cognitive fog was once misdiagnosed as a severe case of ADHD.  By the time I had my blood test, it was too late for me to avoid this on my own, as the cognitive fog had set in.  The reason I had cards printed in the first place was because CPT2 episodes often made me too scattered to properly advocate for my own care.  As a side note, like most invisible illnesses, CPT2 is only an issue during an episode.  There is no cognitive fog unless I'm in the midst of an episode.

The good news is that the VCH Metabolic Disease Clinic consulted with the ER doctors by phone late at night, and visited me the next morning.  I feel like they are on top of my recovery.  That same clinic was the source of the text of the ER protocol on the card, which makes it really beyond comprehension that the triage staff at the ER didn't follow a protocol written by specialists using phrasing that no lay person would use.

The lesson here is that ER visits are very stressful, so I need to treat them the same way I would treat a long hike -- by reducing the risk of a CPT2 episode.  That means carb-loading prior to visiting the ER, bringing lots of carbs with me to eat in case I have to wait, and having somebody with me in case the cognitive fog kicks in.

With invisible illnesses like CPT2, we are absolutely fine until we're not.  Then we're absolutely fine again.  There is nothing visible from the outside that tells people we're at higher risk than the person sitting next to us.  That said, I actually handed the ER protocol card to literally every health care provider I saw on that visit, and nobody followed it, so I'm not sure what more I could have done to make my invisible illness more visible. Of course, once a standard method of evaluating body damage showed damage (i.e. the CK results), the invisible illness was suddenly visible to all.  But the shame of it is that the entire episode could have been prevented if any one of the providers had taken the ER protocol seriously.
Posted by Gary Shuster at 8:48 PM No comments:

The description of Season 1, Episode 1 is "Detective Work: The once-athletic Angel, 23, suffers from episodes of muscle pain so severe she often can't move.  As she begins a nursing career, she needs answers."

Given the title of the blog I'm posting on, it shouldn't surprise anyone that her disease is diagnosed as CPT2 deficiency.

First, the fact that she spent nearly a decade trying to figure out her diagnosis means that I personally consider this blog to have failed her.  The idea of posting my experiences was to help people like her (seeking diagnosis) by giving them something to discuss with their doctor.  It also means that the super-helpful Facebook FOD group and the great, more specific "What you can do despite CPT2" Facebook group have failed her. They are great resources, but somehow didn't place high enough in search results for searches done for the key symptoms of CPT2 episodes.  I personally think the quickest answers come from the Google Group for CPT2, but that too didn't help.  As much as the CPT2 community is a strong one, we need to do much better at getting listed in response to searches for symptoms of CPT2 attacks.

So, here is a quick search-engine-friendly, somewhat incomplete list of symptoms (note that I do not have advertising on this blog and I'm not trying to monetize any improved search engine results, I just want people with CPT2 to be able to find the resources they need).

Coca-Cola or Coke colored urine, dark pee, dark red or other evidence of blood in the urine (since many quick tests just test for iron in the urine and call it "blood", somebody with muscle fibers in their urine will test positive for blood in the urine if the test just looks for iron).

Muscle weakness, exercise makes my legs hurt so much I can't bend them, I suddenly get very stiff and painful muscles.

I got propofol infusion syndrome PIS or hyperthermia from an anesthetic that act on fatty acid.

When I tried Atkins, Paleo, low carb, no carb diet, my muscles hurt a lot.

My doctor doesn't know what's wrong with me, but my CK is sometimes really high.

If these help one person find this blog and then go on to the community groups I linked at the top, I'll call it a success.

Posted by Gary Shuster at 7:52 PM No comments: